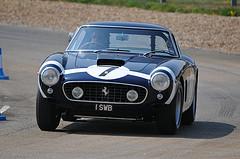 Prepared by the Office of Strategic Development, international automobile holding "Atlant-M". May 2010. The full version of the document with tables and graphs can be downloaded here – 'Analysis of automobile market, January – April 2010 '. The economic situation in the countries where the "Atlant-M" in April 2010, has continued to evolve for the better, and her prognosis is generally favorable. Volatility in global financial markets could slow incipient restoration of production and consumption, including car sales, but talk about the second wave of the crisis, in our opinion, wrong. The April results of new car sales in Russia and Ukraine have confirmed the positive expectations. For the first time since October 2008 recorded growth in sales over the same month of previous year.

"However, the coming months, this process can be slow, for example, because of the unwillingness of market participants to growing demand and shortage of cars, but we hope that in the second half of 2010, these problems can be solved in part. In this regard, we continue to believe that the Russian market of foreign cars in 2010 could rise to 1.1-1.2 million cars in Ukraine most likely the result of 160 to 170 thousand cars ", – says Alexei Tereshchenko, director of the Office of Strategic Development" Atlant-M ". In Belarus the situation is much worse – rates falling car market is growing. Failure recent negotiations with partners in the Customs Union – Russia and Kazakhstan – as long mothballed anomalous situation of high import duties to legal entities in Belarus and the lowest – for individuals. In this regard, We continue to believe that lower taxes for individuals will remain at least several months (and probably before the end of 2010). The automobile market in Ukraine in April showed a slight increase.

Sales growth to the level of April 2009 and the monthly average in the I quarter 2010 – by 12% and 33%. Objectively, the growth should continue (with a dynamic, visually reminiscent of 2006 at a lower level), but much will depend on the work of the Ukrainian automobile industry, now experiencing operational problems. In the event that consumers will be asked quite inexpensive cars Ukrainian assembly under the Korean and Chinese brands, the market growth in the II half will be significant. Sales of all brands of the top 20 on the Ukrainian market, but Subaru (falling to 20%), in April 2010, grew up. However, despite the fact that the sales dynamics in grades varies, top-10 in April, compared with I quarter 2010 was not unchanged. So leaders are Korean Hyundai, Kia and Chevrolet-DAT, and close the top-10 Skoda, Volkswagen and Nissan. During the second ten major changes also did not happen at the same time very successfully completed in April Daewoo, Ford, Mazda and Fiat. Sales of Suzuki and Ssang Yong to remain the same level.

One of the most important details of the cellular phone is its battery. All know how to use battery charger for mobile phone, but not many know how to do it. When we have drained the battery, we connect the charger and charge up to readiness. However, at one point, begin to notice that the time of fully charged battery is smaller than it was before. So. Let's start with the nickel-cadmium (NiCd) and nickel-metal hydride (NiMH) batteries. Everyone knows that at the end of the battery in the normal charger green light to indicate that the battery is fully charged and ready to go work. If the battery is charging the phone, then the latter will inform you about his usual manner.

As a result, you believe that your battery is charged, has full capacity and could trust him at 100%. But such data can not be trusted! "Green Light" conventional charger does not guarantee sufficient (nominal) capacity and serviceability of the battery. The whole point is that the usual charger charges (fills) battery electric power only as long as there are so-called "free space", while the amount of injected energy into the battery can not be estimated! This suggests a simple analogy with the glass, which we examined in detail when discussing the electrical capacity of the battery in the article. If the empty glass can be poured into 200 ml of water, in the same glass, but partially filled, such as sand or small stones – a much less.