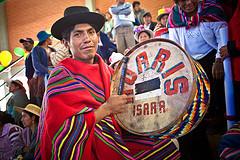 On the other hand, there is now a permanent and supportive contact with personalities and cultural and charitable institutions in Brazil, confirming that they also support the statement of the Guarani as an official language of Mercosur. 7. DE AMONG THE NEW MEMBERS OF MERCOSUR: Bolivia BOLIVIAN SITUATION official the Guarani before Paraguay and Corrientes inclusive. This is a very important reading we are doing today Guarani regional. In fact, Bolivia has four official languages: Castilian, Guarani, Quechua and Aymara.

All south-eastern Bolivia is almost Guarani-speaking. There are intercultural bilingual education programs with several years of tradition. They also have a myriad of publications in Guarani. But the most striking note of recent times recently gave the current Bolivian President Evo Morales, to deploy two years by state officials to learn and use in interpersonal relationships, more than Castilian any of the other official languages, including including the Guarani. Also, starting in 2009, Bolivia enabled three Universities. One for the Guarani, Quechua and the other for the third for the Aymara, where professionals will be trained through classes in these languages. 8.

BEYOND THE MERCOSUR: THE STRONG INTERNATIONAL SUPPORT There is no doubt that the Guarani – internationally, became something like the pretty girl. It seems that became a fatal attraction for everyone. We can say that in all continents of the earth one or more concentrated attention on this ancient and enigmatic language. There are now nearly 5 million Internet sites in the world that promote the Guarani. Specifically, Google-one search engine, has a version translated into Guarani.